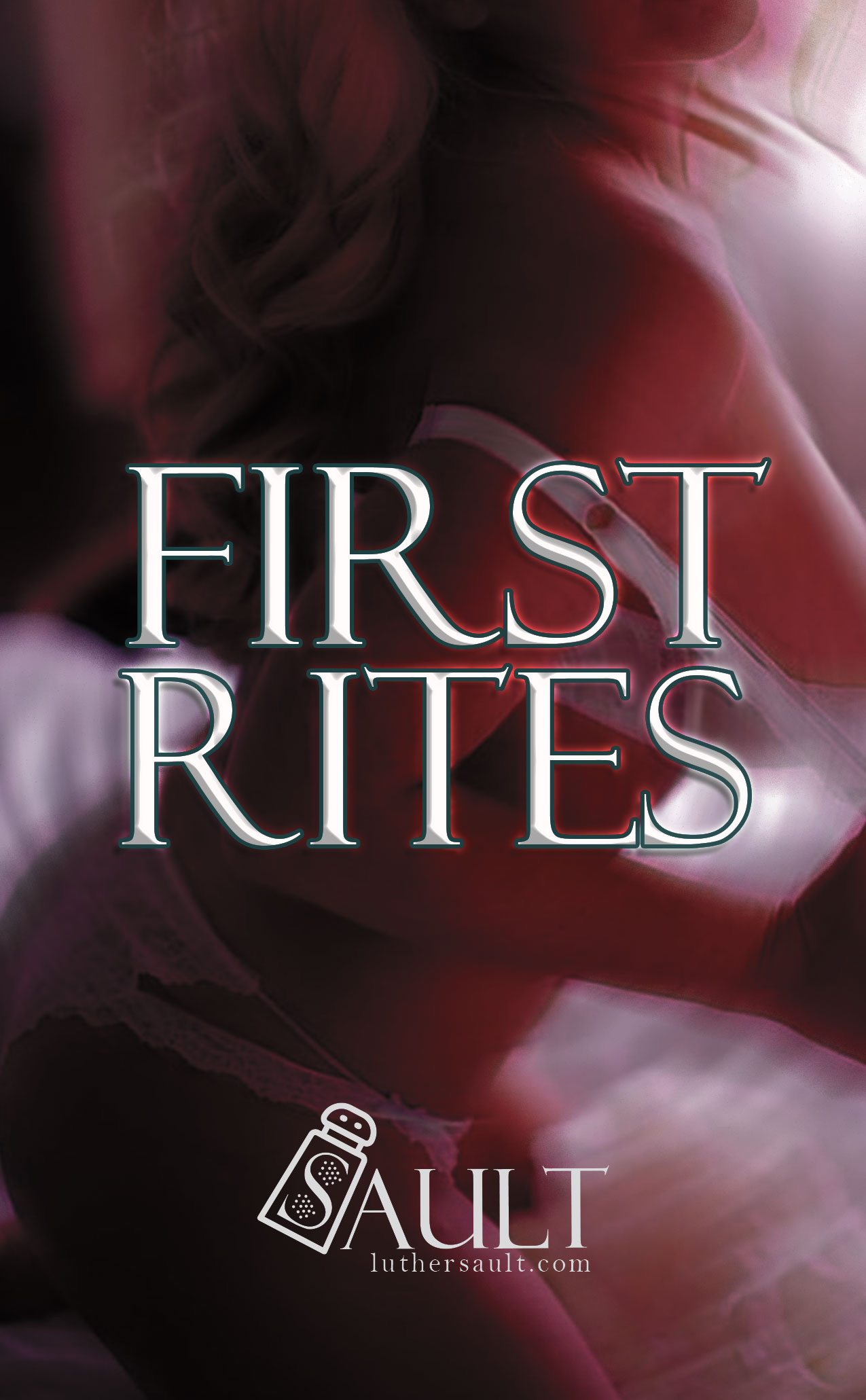 Who has the First Rites to the bride?

For my purposes, the concept of First Rites has a modern twist. In our age of women’s empowerment, I’ve envisioned a woman who has taken her sexuality into her own hands. She is focused on her own desires and is willing to do what it takes to find fulfillment. Even if her methods could end up with people she cares about being hurt, she values her own happiness more. Our character feels that she can do whatever she needs to in the effort to be happy. Anyone and everyone else could go to hell.

Who has the First Rites to the bride?

For my purposes, the concept of First Rites has a modern twist. In our age of women’s empowerment, I’ve envisioned a woman who has taken her sexuality into her own hands. She is focused on her own desires and is willing to do what it takes to find fulfillment. Even if her methods could end up with people she cares about being hurt, she values her own happiness more. Our character feels that she can do whatever she needs to in the effort to be happy. Anyone and everyone else could go to hell.

The day had been perfect from the start. Every flower petal was beautifully illuminated. The sky blue and cloudless. Asking for a better wedding day would be asking too much of the universe. Everything that could be expected to go wrong, didn’t. As she walked down the aisle, Aly wondered what she’d done to deserve the life she had.

She was wild hearted and always had been. Aly had given her bachelorette party it’s proper respect and partied; hard. Fully in the care of friends, Aly had allowed herself to drink well beyond normal and felt lucky. There wasn’t even a hangover. The plan had been to loose herself and if she got black out drunk enough to fuck some stripper, so be it. Aly had anticipated needing to throw up but, the moment never came. Instead, she’d made it to the ceremony without incident.

“You doing alright in there?” It was Millie, tapping on the closed bath room door. It was a friend. A friend Aly had been surprised to make.

The bathroom door closed. Aly hadn’t needed to use the bathroom. She needed the privacy. As perfectly as things had gone, she felt something missing. She almost said no to Walter. Aly knew in her heart she loved him. But, there was no way she’d be satisfied with him alone. She doubted any one person would be enough. A difficult feeling to explain.

Aly had a few men, and women she kept some kind of physical relationship with. Some felt better than others but, there was always something particular that Aly would find herself attracted to. Age, weight, race didn’t matter. If Aly was interested, there was a good chance of a fuck in your future.

The dress she’d worn to her reception was much more comfortable than what Aly walked down the aisle in. They were the same combination of creams and whites, but the cut and material of her reception dress felt a thousand times better. Her gown had been hot. The fabric looked good, but trapped heat so much that Aly’s hair was nearly ruined by the time the ceremony was over. If nothing else, it was a convenient excuse for some alone time in the bathroom.

The DJ had apparently got into his dance party set. Aly felt the music vibrating the room more than she could hear the music. Aly loved a good time. But, tonight she wasn’t in the mood for dancing. At least not the dancing. Her mind was on a particular kind of good time. That kind took the form of a 6’6, very good looking African American man, Coleman. Just thinking about the man made Aly horny. He had the body of a former athlete that had put on a little weight. Aly liked it. His pudgy stomach, southern accent, and his salt & pepper hair made Coleman look very distinguished.

“Aly dear,” it was her mother. No doubt about to introduce her to some guy who did something, a long time ago. Aly turned to face her mother, “This is Mr Sanders. He’s an uncle of one of those cousins Walter has.”

“Mr. Sanders is a very nice man dear,” Robin’s mother continued, “We were just talking about nice places to go for a honeymoon.”

“Oh really? Where did you go on your honeymoon Mr. Sanders?” Robin asked, not making any eye contact, still looking for Coleman.

“The U.S Virgin Islands! It was magnificent. Have you ever been?”

“No I haven’t,” Aly began to answer but her mother decided it was time to cut back into the conversation.

“The Caribbean, Aly had been, not to the Virgin Islands but she has been to Nassau with myself and her late father.”

Aly walked away from her mother and Mr. Sanders. She wasn’t in the mood to listen to tales of the good old days. Aly took a champagne glass from a wandering waiter and downed it in one gulp. She was starting to get frustrated when her phone buzzed in her hand. It was Coleman. “I found somewhere to be alone with you. Can you come now?”; Aly’s heart sped up. Her response was a simple, Yes.

Aly smiled and greeted people as they came to congratulate the bride personally. She was nice and if anyone noticed her anxiety they thought it was the newly wed jitters. When her phone buzzed again, Aly didn’t finish reading the text before she started walking out of the reception hall.
Coleman’s directions led Aly away from the guests, down two hallways and through what looked like an old kitchen. She kept going , turning whenever the instructions told her to. The building was much larger than she guessed and Aly was almost concerned she’d gotten lost in the unknown part of the building.

She wondered why too many The instructions ended and Aly was in a small hallway far away from the event hall her reception was in. At the end of the hallway there was a green door. Made more ominous due to the door being slightly open and no light coming from where it lead.

Aly decided to text Coleman, “Are you behind this green door?”
She got frustrated realizing that her phone service was essentially non-existent this far into the building. With a lot of hesitation, Aly approached the green door.

“Coleman, if you’re in there trying to scare me, stop it.” She said, mostly to keep herself from freaking out.

There was no response but Aly kept moving towards the door. She hadn’t come all this way to let a creepy door get in the way of her fun. One more check of her phone told her that the message had been delivered. But not read. Aly swore under her breath but was startled by the door swinging open.

“Jesus fucking Christ,” Aly shouted in the hall way, “You’re a real asshole.” Aly felt calmer after hitting Coleman in the chest as hard as she could.

Coleman pulled her close, “I like this dress better than your gown.”
“Did you? I didn’t see you there at all,” Aly told him. She was already forgetting being scared. That was quickly being replaced by the heat of lust.

“I was there for the whole thing. You were beautiful.”
“But you like this dress better?” Aly asked.

Coleman slowly worked his hands over her body. His hands were big and were firm as they cupped her ass. “Yeah, I like this one better. If you still had your gown on, I wouldn’t feel any of this.”

“Mmhmm,” was all that Aly could manage saying. The heat had increased and was rising every moment she was near Coleman. Her panties were definitely soaked.

Somehow, they ended up behind the green door. The room was small and dimly lit. It must have been an office at some point. There was all the furniture of an office you would expect. A desk that looked sturdy but had layers of dust covering it. A chair that matched the desk in every way, including the dirt. Prints of famous paintings were on the walls in an arrangement that didn’t have any flow. Or placed in any way that made sense.

“How’d you find this room?” Aly asked.
“Just found it. I walked until I couldn’t hear anything from the reception, then walked in here.”
“Oh okay,” Aly was cut off by Coleman, his hands doing the talking. His fingers felt warm on her thighs adding to the sensation. When a well placed finger rubbed against the fabric of her panties, Aly moaned.

They began kissing. The heavy, rushed kissing between two people who weren’t thinking. Their bodies moved on instinct alone. Aly reached into Colemans pants. He was solid an she felt the blood flowing within it. With her free hand, Aly undid his belt. She knelt with expertise in front of him and didn’t bother removing his boxers. She slipped the throbbing cock around the fabric and into her mouth.

Coleman moaned as Aly’s lips sensually wrapped around his dick. Aly enjoyed the feeling of him growing stiffer in her mouth. Whenever Coleman’s voice vibrated through his body, she got wetter. The deep baritone could be felt through his dick.
“You acting like you missed me,” Coleman said chuckling at his own joke.

Aly stopped and looked up at him, her lips teasingly close to his dick. She had missed him. But he didn’t need to be cocky about it. A little bit of teasing would teach him a lesson.

Coleman carressed the back of her head when he spoke, “Awe, don’t be like that. I’m just talking shit.”

Aly hadn’t broken eye contact, and didn’t as she continued. Aly had always enjoyed sucking dick nd Coleman’s seemed to be the perfect fit for her. The nastier she got, the more Coleman moaned. Eventually, the sensations felt so good, Coleman had to hold himself up against a wall.

Aly didn’t feel guilty at all. Yes, she’d just gotten married. Yes, she loved her husband. But, there were only a few things in the world that Aly enjoyed, and this was one of them. It wasn’t a special connection to Coleman. She didn’t have daddy issues. Aly enjoyed sex. Lots of it. Being spontaneous, or sneaky about it made the sex better. Sometimes that meant you had to have an affair or two.

Aly gave him her attention, “I’ll text you,” was all she said before giving Coleman quick peck on the lips, then walked out the way they had come in. Coleman didn’t need to worry. Aly would want him again soon. After all, it he did have first rites to her body. He just didn’t know it yet.

You can find more of my work through Apple Books, Amazon, Smashwords, Barnes & Noble, & Wattpad. Share & Follow if you have the time. It’s greatly appreciated.